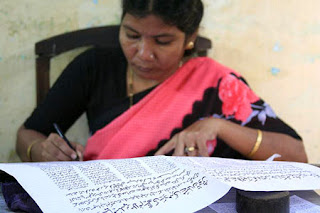 Every day in the city of Chennai, India, three calligraphers called katibs painstakingly write out the news of the day in their native language. The Musalman is a four-page evening newspaper that is written entirely by hand before being mass produced by a printing press. The newspaper contains national and local news as well as a sports section. The katibs traditionally leave a small corner of the front page blank in case there is late-breaking news that must be added at the last minute.

The Musalman is the oldest Urdu-language newspaper and is distributed to nearly 22,000 citizens each day. It is largely considered to be the world's only remaining handwritten newspaper of its kind.
Posted by Anonymous at 1:30 AM