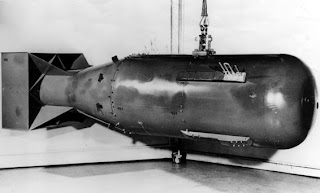 On August 9, 1945, the United States dropped the last atomic bomb to date on Nagasaki in Japan. Three days earlier U.S. forces had bombed Hiroshima, and this final bombing was the event that finally lead Japan to surrender the Pacific War, thereby ending World War II.

Though Germany had surrendered in May of 1945, an act that ended the war in Europe, Japan had refused to surrender. U.S. President Harry S. Truman issued the order to bomb the two Japanese cities. Over the course of the next several months 90,000-160,000 people in Hiroshima and 60,000-80,000 people in Nagasaki died either from the injuries sustained during the bombings, burns, or subsequent radiation sickness.
Posted by Anonymous at 1:30 AM