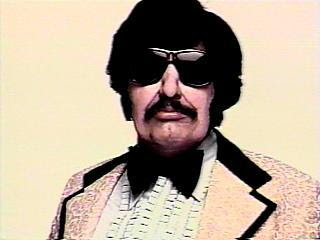 Comedian Andy Kaufman was famous for playing with audience expectations by mixing performance art and mysterious alter egos into his stand up. One of his most famous creations was Tony Clifton, a washed-up, vulgar, and often-drunk lounge singer who served as the opening act for Kaufman’s comedy gigs. With his terrible singing voice, confrontational attitude, and tendency to forget his lyrics, Clifton summed up every stereotype of the aging Vegas entertainer, and he soon became a popular character. After it surfaced that Clifton was actually being portrayed by Kaufman in costume and makeup—something both men denied—Kaufman enlisted both his brother and his friend Bob Zmuda to portray the character on stage in order to further the illusion that he and his creation were separate people. Tony Clifton was soon making appearances on everything from David Letterman’s late night show to Dinah Shore’s talk show, where he was famously thrown out of the studio for dumping a plate of eggs on the host’s head. He was even slated to appear as a special guest on the sitcom Taxi, but was kicked off the set for being disruptive. Kaufman died in 1984 without ever revealing the truth about the character, and even today it’s not widely known how many times he actually appeared as Clifton, or how many times an accomplice stepped into the role. The gruff lounge singer has continued to make appearances since Kaufman’s death, which has only furthered the illusion that Tony Clifton is actually a real person.
Posted by Anonymous at 1:30 AM