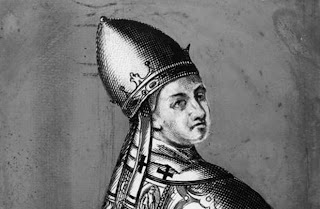 Benedict IX, born Theophylactus of Tusculum, is known mainly for two things: 1) he held office on three separate occasions, and 2) he is the only pope who ever sold the papacy (to his own godfather, of all people).

Benedict became pontiff at a very young age, thanks to the political prowess of his father, who had managed to get the papacy reserved ahead of time for his son. With little actual training or preparation that qualified him to act as pontiff, Benedict led a highly immoral life, and was accused of various rapes, adulteries, and murders. According to St. Peter Damian, Benedict was “a demon from hell in the disguise of a priest,” and his carousing eventually caused him to be forcefully expelled from Rome.

Benedict managed to regain his throne, but then – surprise, surprise! – he was sidetracked by a prospective marriage (to his cousin) and sold the papal chair for a significant amount of money to his godfather, a priest who named himself Pope Gregory VI. His later repentance and attempt to resume his position created quite a controversy, forcing the German King Henry III to intervene. Benedict was subsequently excommunicated from the church.

“His life as a pope,” wrote Pope Victor III, “was so vile, so foul, so execrable, that I shudder to think of it.”
Posted by Anonymous at 1:30 AM