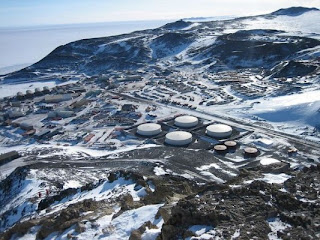 Located literally at the bottom of the world, Antarctica is easily one of the most remote places on the face of the Earth. There are no native inhabitants to the continent, but there are several research centers constantly in operation there, and of these McMurdo Station is the largest. Located on Ross Island near the northern tip of the continent, the almost perpetually frozen station is a center of international research, and is home to as many as 1,200 scientists and workers during the warmer summer months. It’s one of the most desolate locations on the planet, but although McMurdo is as far from a major city as any location in the world, even it is no longer as backwater as it used to be. Trips by boat to Antarctica once took months, sometimes even years, but McMurdo’s three airstrips have helped make the region a much less remote destination than before. Thanks to this, the scientists at the station now enjoy many of the modern amenities found in major cities, including gyms, television, and even a nine-hole Frisbee golf course.
Posted by Anonymous at 1:30 AM