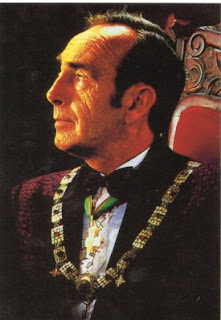 Few micronations ever have any real success at being recognized by the larger countries that they “secede” from, with the notable exception of Australia’s Hutt River Province. Its history dates back to 1970, when Leonard Casley, a farmer from outside of Perth, got into a dispute with government officials over wheat quotas. When no reasonable compromise could be reached, Casley resorted to a loophole in British law and declared that he and his 75 square kilometer property had seceded from the state of Western Australia. A comedy of errors and inaction in the Australian government led to Casley’s claim receiving an uncommon amount of legitimacy, and when he was threatened with prosecution he simply declared himself “His Royal Highness, Prince Leonard of Hutt,” in order to take advantage of ancient law that made monarchs immune to arrest. Since then, the Hutt River Province, or the Principality of Hutt River, as it is now known, has existed in a legal grey area. Residents are not subject to Australian taxes, but the government has still never officially recognized the micronation as a sovereign entity.

Once Hutt River gained its de facto independence, Price Leonard immediately went about the business of drafting a bill of rights, a flag, and a form of money called the Hutt River Dollar. The Principality is still going strong today, and Hutt River has even become something of a tourist destination where visitors can buy Hutt River coins and get their picture taken with the Prince, who is now well into his 80s.
Posted by Anonymous at 1:30 AM