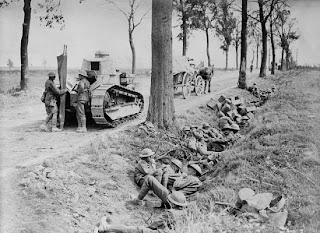 In the Spring of WW1, the Germans were left in a weak position, having gained ground that they could not adequately defend and having spent most of their best troops trying to break the Allied lines. The Allies, on the other hand, were battered but not broken, and had the advantage of thousands of fresh troops from the United States, under the command of General John “Blackjack” Pershing. The Allied supreme commander at the time, Marshal Ferdinand Foch, decided that the Allies should go back on the offensive, and agreed to a plan proposed by British commander Sir Douglas Haig to attack the weakened German Second Army at Amiens. The attack, known as the Battle of Amiens, was a success, forcing the Germans to eventually abandon the lines at Amiens. The Allies launched another series of offensives, including the battles of Second Somme, Second Noyons and Second Arras. The result was a spectacular success; the German lines were eventually broken and the Germans were forced to retreat back to the Hindenburg Line, a series of defensive works protecting the German homeland. The Allies then started attacking the Line with a series of offensives directed at achieving final breakthrough. The weakened, exhausted Germans put up a fight, but were unable to defend the lines, and eventually, the Allies broke through the Hindenburg Line at the Battle of Cambrai. The Germans eventually sued for peace, and an armistice was signed on November 11, 1918, bringing the bloody battles of World War I to an end. The Hundred Days offensive was a spectacular success for the Allies, but they paid for it dearly; the Allies lost a total of 1,069,636 casualties, including 127,000 Americans. The Germans lost 785,733 casualties, but perhaps the greatest loss was the collapse of the German Empire and the crushing peace terms the Germans were later forced to accept.
Posted by Anonymous at 1:30 AM