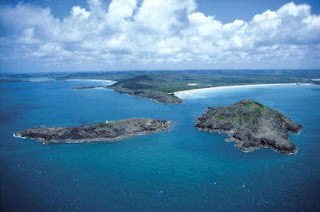 Australia is known both for its extremely low population density and untouched natural beauty, both of which are best exemplified by Cape York, Peninsula, a huge expanse of untouched wilderness located on the country’s northern tip. The region has a population of only 18,000 people, most of whom are part of the country’s aboriginal tribes, and it is considered to be one of the largest undeveloped places left in the world. This helps contribute to its stunning natural beauty, but it also makes Cape York about as difficult to reach as any destination in Australia. The peninsula has become a popular destination for adventurous tourists, who drive jeeps and trucks down the unpaved Peninsula Development Road whenever it isn’t closed due to flooding during the rainy season. But even with 4-wheel drive trucks, many of the more heavily overgrown parts of Cape York Peninsula are completely inaccessible, and some regions have still only been surveyed by helicopter.
Posted by Anonymous at 1:30 AM