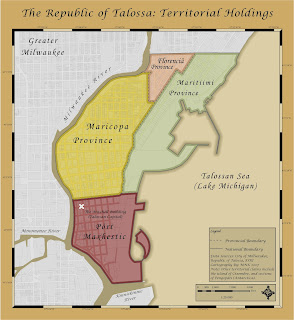 Size: Indeterminate, but includes a good part of Milwaukee, Antarctica, and some French islands

The internet has become a veritable playground for amateur nation builders, as new countries—many of which exist only on paper—can use websites and blogs as a way to build up their populations and drum up support for their cause. There is perhaps no better example of this than Talossa, an upstart country formed in 1979 by then-14-year-old Robert Ben Madison of Milwaukee, Wisconsin. It officially seceded from the United States in the same year (though, as its website states, the U.S. didn’t seem to notice) and established itself as a constitutional monarchy with “King Ben” as its head. In the beginning, Talossa was just a joke hobby (the original “Kingdom” consisted of Madison’s bedroom), but in 1995 Talossa became the first micronation to get a website, and from there its legend and its membership grew rapidly. Soon, it had developed a cult following, and conventions called Talossafests were regularly held in and around Milwaukee.

As micronations go, Talossa features one of the most fully realized cultures. Fans have traced its “history” back to the Berbers, written a national anthem (“Stand Tall, Talossans”) and, most impressively, composed a 25,000-word dictionary of their own invented language, the so-called Talossan Tongue. As one of the world’s oldest micronations (Madison claims to have coined the term), Talossa has become famous the world over, but it has not been without controversy: in 2004, a group of citizens rebelled against the crown and formed the Republic of Talossa, and it seems that a rival Kingdom has also recently sprung up—all only online, of course.
Posted by Anonymous at 1:30 AM