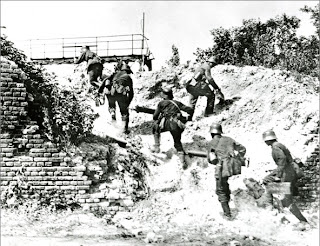 Also known as the Ludendorff Offensive or the kaiserschlacht (Kaiser’s battle), the Spring Offensive was launched, as its name suggests, in the Spring of 1918. Germany’s back was against the wall; the country was suffering from a British blockade of its ports, and it had lost so many men that the German army was having to recruit old men and young boys to fight at the front lines. In addition, the arrival of thousands of fresh troops from the United States was paving the way for a certain Allied victory. The German high command knew the only way to win the war was to defeat the Allies with a major offensive before the Americans could be fully deployed. German general Erich Ludendorff was chosen to plan the offensive, which was launched on 21 May, 1918. The plan was for a major push against the Somme front held by the British, with three other attacks intended to divert Allied attention from the main push. It was hoped the attack against the Somme would break the Allied lines, breaking the British army and forcing the Allies to seek armistice terms. Using fast moving “stormtroopers”, the Germans initially made significant advances, pushing the Allies back and gaining a huge chunk of land in World War I terms. However, the operation lacked clear goals, and the Germans ended up moving so fast that they were unable to transport enough supplies to maintain the advance. Also, they failed to provide fast moving units, such as cavalry, to exploit their gains. The Allies eventually dug in and halted the German advance, ending the offensive with the Germans in a weak position to defend when the final push of the war was made. The Germans lost over 680,000+ casualties in the push, mostly to the stormtrooper units leading the assaults, while the Allies lost a combined 850,000+. The attack failed in its goal to break the Allied forces, and combined with fresh American troops, the Allies were ready to make the final assault against the Germans.
Posted by Anonymous at 1:30 AM