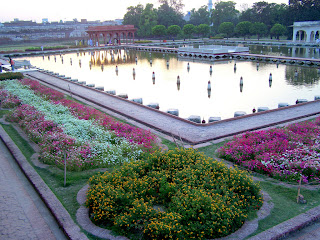 The Shalimar Garden is a Persian garden and it was built by the Mughal emperor Shah Jahan in Lahore, modern day Pakistan. Construction began in 1641 A.D. (1051 A.H.) and was completed the following year. The project management was carried out under the superintendence of Khalilullah Khan, a noble of Shah Jahan's court, in cooperation with Ali Mardan Khan and Mulla Alaul Maulk Tuni. The Shalimar Garden is laid out in the form of an oblong parallelogram, surrounded by a high brick wall, which is famous for its intricate fretwork. The gardens measure 658 meters north to south and 258 meters east to west. In 1981, Shalimar Gardens was included as a UNESCO World Heritage Site along with the Lahore Fort, under the UNESCO Convention concerning the protection of the world's cultural and natural heritage sites in 1972
Posted by Anonymous at 1:30 AM