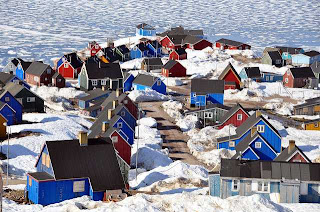 At 836,000 square miles in size, Greenland is the world’s largest island, but its tiny population of 57,000 people means that it’s also the most desolate. And of all the towns in Greenland, perhaps none is as remote (or as difficult to pronounce) as Ittoqqortoormiit, a small fishing and hunting village located on the island’s eastern shore, to the north of Iceland. The town is part of a municipal district roughly the size of England, but it has a population of only slightly more than 500 people, meaning that each person technically has more than 150 square miles to call their own. Residents make their living off of hunting polar bears and whales, which are prevalent in the area, and by fishing for Halibut during the warmer months. Ittoqqortoormiit lies on the coast, but the seas surrounding it are almost perpetually frozen, leaving only a three-month window when the town is easily accessible by boat. There is an airport some 25 miles away, but flights are rare. For the most part, the town, one of the northernmost settlements in the world, is completely isolated in the vastness of the tundra.
Posted by Anonymous at 1:30 AM