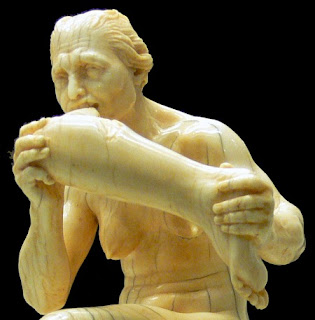 If you've ever said someone was so cute you could eat them, and meant it literally, you may be a vorarephile. You also qualify if you have ever gotten hot thinking about being roasted on a spit before someone eats your ooey gooey flesh. These fetishists fantasize about either eating someone or being eaten, but because the process is rather permanent, the majority satiate their desires by looking at pictures and videos of people roasting on fires and other cannibal-related imagery.
The most famous vorarephile is Armin Meiwes, who is now serving a life sentence in Germany after he killed and ate a willing victim that he met over the internet. The case brought a lot of attention as people debated whether it was truly murder given the victim's conscious consent to the act
Posted by Anonymous at 1:30 AM