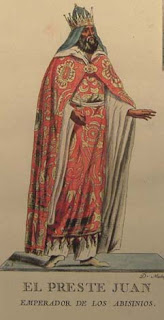 There might be more well known entries on this list, but none of them had the same influence on world politics, religion, or exploration as Prester John, a mythical king who was once believed to have presided over a Christian empire in Asia. His legend dates back to the 12th century, when it arose as an amalgam of adventure stories, true histories of Christian missionaries, and the exploits of Alexander the Great. Prester John and his kingdom became a true sensation in 1165, when a letter supposedly written by him began circulating around Europe. According to these fantastical sources, Prester John was a direct descendant of one of the Three Wise Men. His kingdom, which was suspected to be in India or the Middle East, was seen by the Europeans of the time as a shining light of civilization in a region that was viewed as exotic and barbarous. Prester John himself was believed to be a kind and wise man who ruled over an empire of great wealth, and his kingdom was often said to include such wonders as the Fountain of Youth and even the Garden of Eden. Despite little evidence of his existence, the legend of Prester John persisted for several hundred years, and for a time he was even linked with the Mongol warlord Genghis Khan. It would take until the 1600s before academics and travelers were able to prove that Prester John was nothing but a myth, but in the interim the legendary king had managed to affect everything from religion to world trade. Not only had missionaries stepped up their efforts in Asia and Africa in the hope of discovering Prester John’s kingdom, but explorers like Magellan were encouraged to seek out new lands in the hope that they might one day stumble upon the mythical ruler.
Posted by Anonymous at 1:30 AM