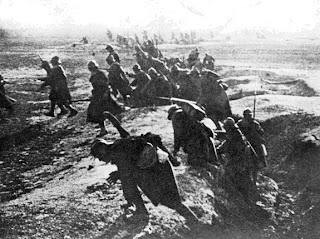 As the battle of the Somme was being planned, the Germans staged a massive attack against the French fortress near the town of Verdun-sur-Meuse. Though the German goal was to capture the town, a much simpler one was even more apparent; simply kill so many French soldiers that it would break the French morale and force them to abandon the fight. The French, though, stubbornly defended Verdun and inflicted horrific casualties on the Germans, while suffering horrific casualties of their own in return. Nearly 40 million artillery shells were exchanged during the battle, pock marking the area with craters, some of which are still visible to this day, and popularized the French battle cry “They shall not pass!”. Verdun came to be for the French and Germans what the Somme was to the British; a symbol of the horrors of war in general, and of the futility of World War I in general. The French lost some 542,000 casualties, while the Germans lost some 435,000.
Posted by Anonymous at 1:30 AM