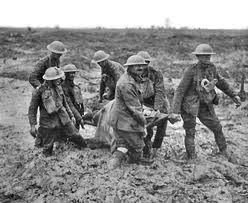 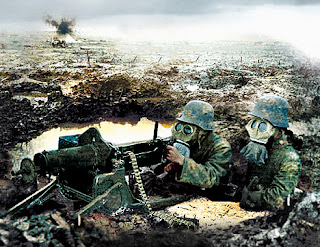 This battle, fought from July to November of 1917, has come to be synonymous with the grinding and bloody misery of trench warfare during World War I. Also known as the Third Battle of Ypres, the aim of the battle was to breakthrough at the village of Passchendaele in West Flanders, Belgium and outflank and beat back the German Army. In a series of “bite and hold” operations against the German lines, the Allies sought to wear down the Germans through bloody attrition warfare, culminating in the Canadian Corps taking control of Passchendaele on November 6, 1917, ending the battle. The conditions during the battle were miserable; both sides suffered horrific casualties, with the British gaining only slender territorial gains for their efforts. Mud was a constant feature of the shot up landscape, bogging down tanks and even drowning men. The British Prime Minister of the time, David Lloyd George, used the battle as an example of senseless waste and bad generalship. The Allies lost a total of 448,614 men to the Germans 400,000.
Posted by Anonymous at 1:30 AM