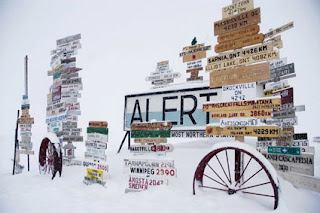 Located in Canada on the tip of the Nunavut territory, Alert is a small village that lies on the Arctic Ocean only 500 miles below the North Pole. It is widely considered to be the northernmost permanently inhabited place in the world (with a whopping five year-round residents), and also one of the most inhospitable. Temperatures in Alert, which also serves as a Canadian radio receiving facility and a weather laboratory, can get as low as 40 degrees below zero, and because of its location at the top of the Earth, the camp alternates between 24-hour sunlight during the summer and 24-hour darkness during the winter. The nearest town to Alert is a small fishing village some 1,300 miles away, and you would have to travel nearly twice that distance to reach major cities like Quebec. Because of its military function, Alert does have an airport, but because of weather it is often unusable. In 1991, a C-130 aircraft crashed there when its pilot misjudged his altitude and brought his plane down 19 miles short of the runway. 4 people died in the crash, and another perished while waiting for a rescue party, which took nearly 30 hours to make the short journey to the site because of a blizzard.
Posted by Anonymous at 1:30 AM