Whale shark on the beach 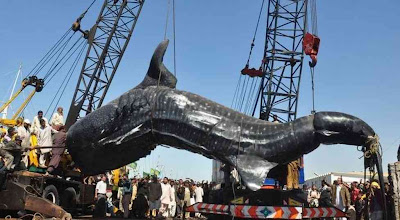 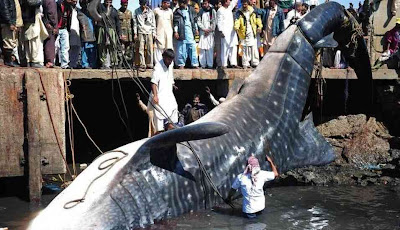 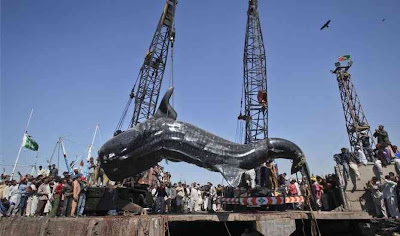 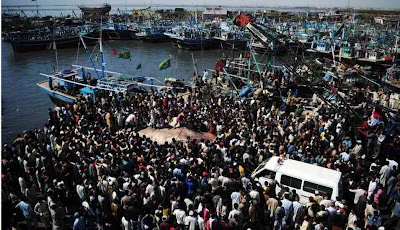 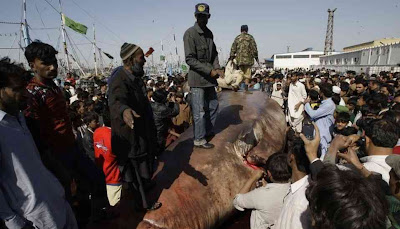 A nearly 36-foot-long whale shark was brought into the Karachi Fish Harbor by local fisherman in Pakistan, who said they found it dead in the open sea.

However experts believe that the female fish, weighing nearly 6 or 7 tons, might have been killed after getting tangled in nets. The whale shark was found “unconscious” ten days ago, nearly a 100 miles from shore. At least five cranes had to be used to pull the fish out of the water. The giant catch was then sold for the equivalent of $18,750. Haji Qasim, the buyer, said, "I have bought the fish, which usually has no significant commercial value, with the help of my friends just to appreciate the efforts of the fishermen who deserve some reward after spending an entire day in the open sea".
The whale shark is the largest species of fish in the world, and like its namesake, feeds primarily on plankton. It is listed as a vulnerable species by the International Union for Conservation of Nature and Natural Resources, and continues to be hunted by Asian fisheries.
Posted by Saj at 1:31 AM