Most Complex Roads In The World

Sure, it feels fantastic to traverse the vast stretches of the best roads in the world via adrenaline pumping speeds. How about a complicated road, one that twists and turns, or has downright congested traffic, or unforgiving terrain? They might give you a headache, but it sure feels good when you've conquered them. Here is the list of the world's most complicated and dangerous roads. Some of these complicated mountain passes can be dangerous if not negotiated with utmost caution, while others are complicated sets of roads and bridges, erected to ensure a streamlined flow of traffic at busy junctions. Check these out… 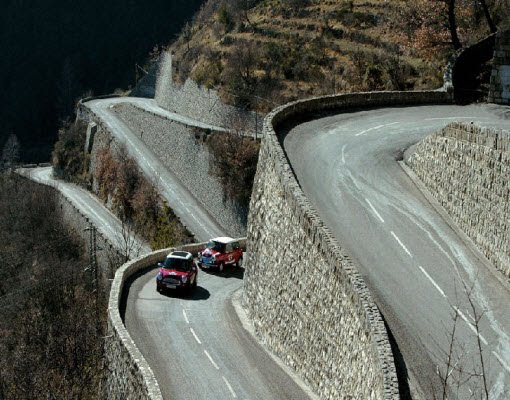 Situated more than 1 mile above sea level, Col de Turini is a mountain pass situated in south of France in the Alps. It's also part of a 20 miles rally stage of the Monte Carlo Rally of WRC, which combines 34 challenging hairpins and long stretches where cars top 111 mph. It is one of the most exciting roads on Earth. The pass was featured in the very first episode of Top Gear series 10, when the presenters went in search of the greatest driving road in the world. At its highest point, Col de Turini is 1607m high. In the north, the Col de Turini starts with a dazzling series of hairpins. Finally, we end up riding in a gorge, with a wild river on the left, and a steep rock-wall on the right. 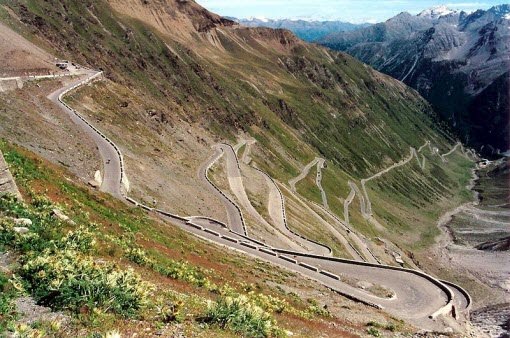 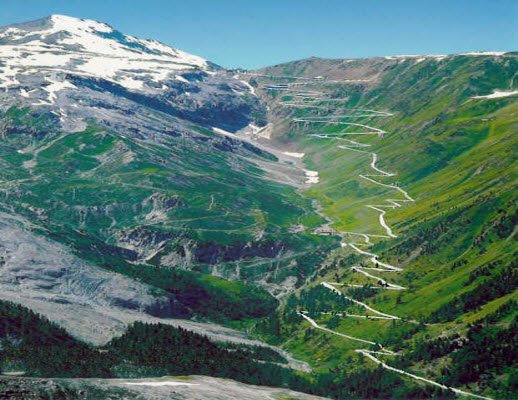 Located in the Eastern Alps in Italy, the Stelvio Pass Road connects the Valtellina with Merano and the upper Adige valley. This mountain road pass is situated at an altitude of around 1.7 miles above sea level. The road is particularly challenging to drive due to the presence of 48 hairpin bends, with the road becoming exceedingly narrow at some points, and some very steep inclines. With a height of 2757 meters, it is the highest paved mountain pass in the Eastern Alps and the second highest in the Alps, after the 2770 m high Col de l'Iseran. While it might not be as dangerous as the other routes, it is certainly breathtaking. The toughest and most spectacular drives are from the Prato side. The mountain pass is one of the best continuous hairpin routes in the world. 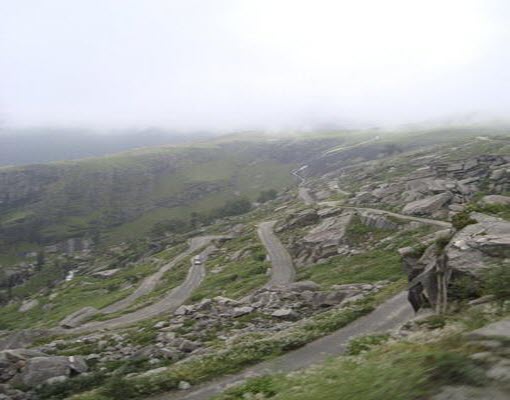 The Leh-Manali Highway is situated in India and spans over a length of 297 miles among the Himalaya mountain range. It passes through some of the worlds highest mountain passes in the world, with a mean altitude in between 2 to 3 miles above sea level. The road is one of the most complicated and challenging roads in the world, with snow, landslides and terrain making the journey exceedingly difficult for anything other than a capable four wheel drive vehicle. The road was built and is maintained by the Indian Army. 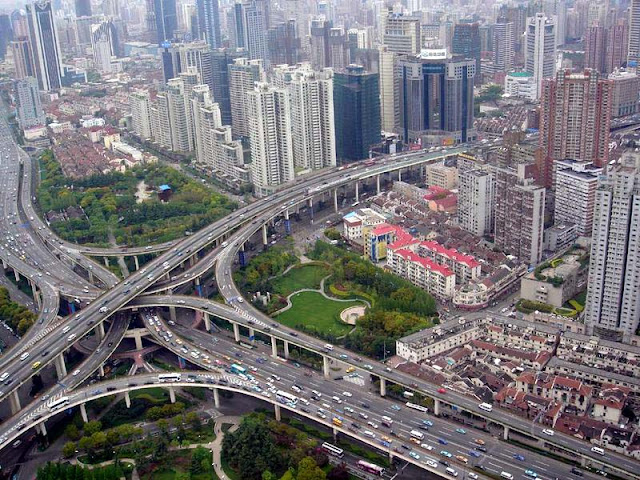 This is one of Shanghai's busiest and largest interchange that caters to thousands of vehicles every hour. It has five levels of bridges that help connect two of the cities busiest highways, directing vehicles without much fuss. 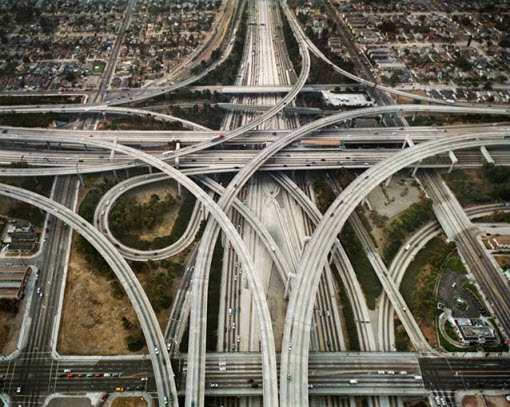 The Judge Harry Pregerson Interchange is situated in Los Angeles, CA and is one of the most complicated interchanges in the country. It permits entry and exit in all directions between the I-105 and the I-110. It's a stack interchange with layers of bridges making a complicated network of roads allowing smooth flow of traffic though both the interstate highways. This interchange was opened in 1993. It is a 4 level interchange with a restricted access lane that can be used by high-occupancy vehicles. 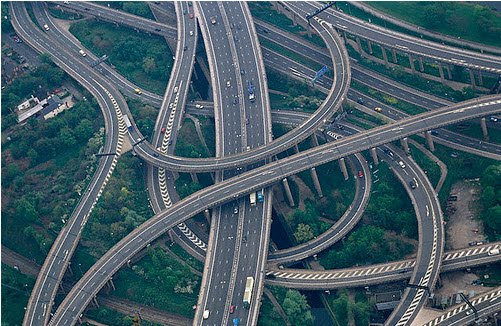 Gravelly Hill Interchange, nicknamed 'the Spaghetti Junction', is the 6th junction of the M6 motorway, where it joins the A38 Aston Expressway in Birmingham, UK. The name "Spaghetti Junction" was coined by Roy Smith, a journalist from the Birmingham Evening Mail in the 1970s. The areal view of the junction sure tells us why it is called the Spaghetti Junction. Spanning an impressive 30 acres, the junction serves 18 routes and includes 4 km of slip roads. Across 6 different levels, there are 559 concrete columns, reaching up to 24.4 m in height. The engineers had to elevate 13.5 miles of the motorway to accommodate 2 railway lines, 3 canals, and 2 rivers. It's the most complicated junction in United Kingdom. 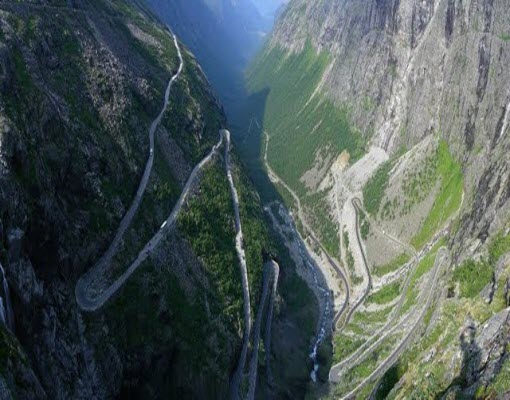 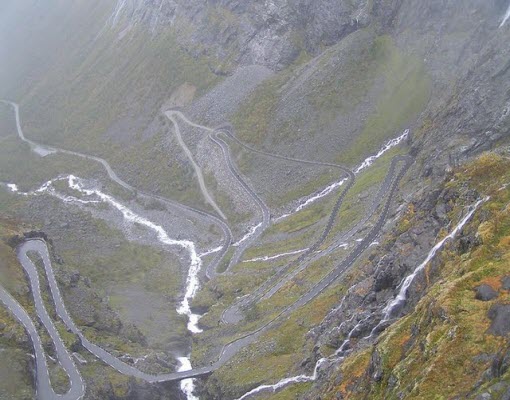 The Fjord in Norway has many roads that attract tourists. The most notable among them is the Trollstigen which is a series of stunning roads with a breathtaking view of a few waterfalls. The word Trollstigen means the Troll Ladder. The road, though not lacking in safety standards, takes a lot of concentration and driving skill to conquer. The vertigo-inducing steep inclines, intense set of hairpins and narrow roads leave no margin for error. However, once you are at the top, the view is just breathtaking. The narrow road leaves us with extremely few possibilities for vehicles to pass each other. The frequent rockfalls in the region have resulted in some upgrades to the road in 2005. At the top, there is a viewing balcony which overlooks the road and the Stigfossen waterfall, a 320 m long waterfall which falls down the mountain side. 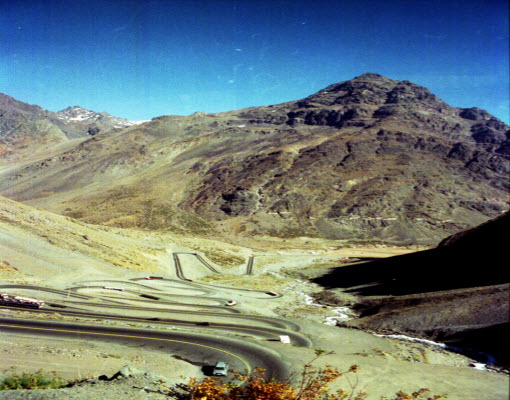 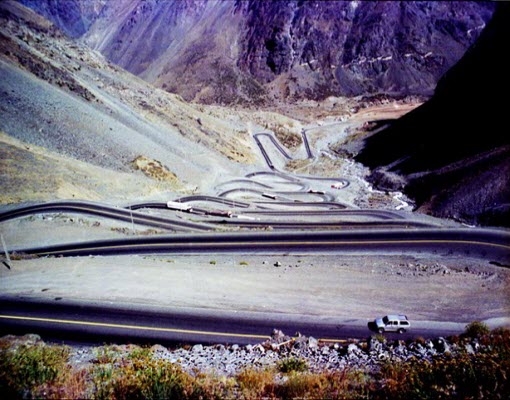 This road passes though the Andreas Mountains on the way between Chile and Argentina. Los Caracoles is a series of hard switchbacks on an extremely steep incline. The road has many steep inclines and hairpins without any safety guard rails. The road is covered with snow for the most part of the year. The snow together with nature of the road requires extreme patience and skill to negotiate. However, this road is maintained pretty regularly and does not have a morbid accident record. Cargo trucks and even double-Decker tourist buses travel through the road on a daily basis, and it's quite an experience. 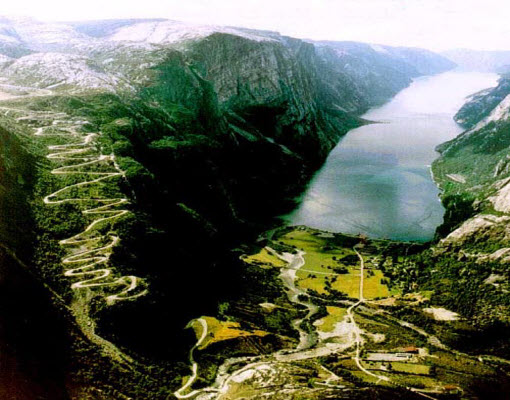 This is probably the most fun road you can travel on four wheels, and then maybe on your two legs checking out the various hiking trails leading from the area. In fact, this might be considered the most breathtaking place in Europe. It all starts with the narrow road up the steep walls of the Lysefjord, Norway. It has 27 switchbacks and a 1.1 km long tunnel at the bottom, with 3 switchbacks inside. The last 30 km of Lysebotn road is a true roller-coaster! It's narrow but has a perfect surface, winding left and right all the time. If you happen to ride a motorcycle in Norway, then this is the road you simply cannot afford to miss!
Posted by Anonymous at 1:30 AM